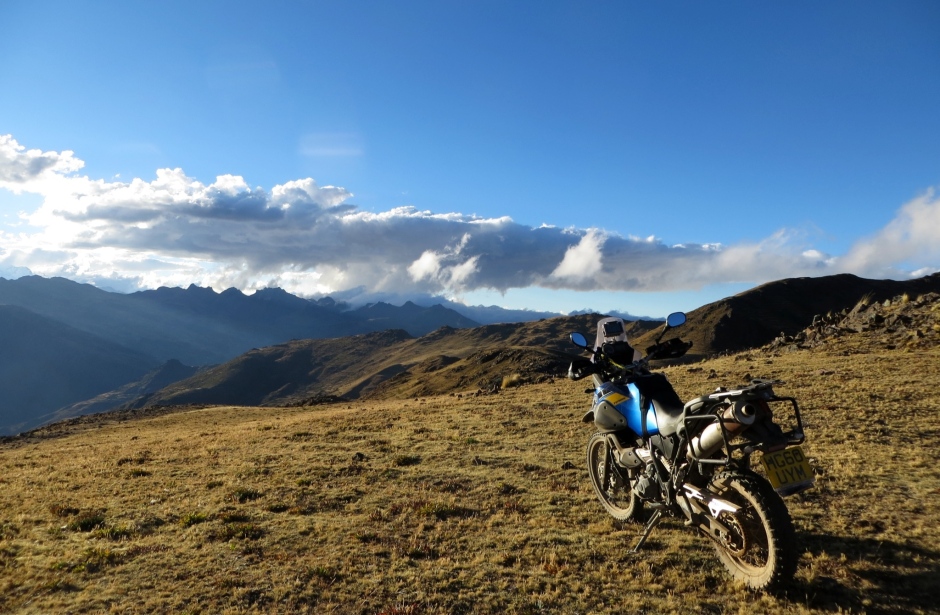 Over the seven months I’ve been travelling up South America I’ve passed through several areas renowned for trekking, notably in Patagonia. However, I’ve hardly ventured into the mountains on foot. But I’ve found myself on numerous occasions justifying to fellow travellers why this is the case.

I see riding a motorbike along deserted, rough roads and tracks through the mountains – especially when I camp en route – as the equivalent as trekking, but with several advantages: you go further and therefore see more during a day; with greater range, you can get to more remote areas than a trekker can reach on foot; riding a motorbike on technically difficult ground is far more fun than simply walking; and of course you don’t have to carry your kit – the bike does that for you. Granted, it is not such a peaceful way of travelling in the mountains, but that is the only obvious disadvantage I can see.

Hence why I haven’t done much trekking.

Yesterday was a perfect example of this philosophy. I set of on my bike after a late lunch, with only three hours of daylight remaining. When I visited the Pisaq ruins last week, I saw a dirt road winding its way up the other side of the valley. So I found the obscured turn for this road and started to head upwards. For the first 15km or so, it switch-backed through cultivated fields and passed scattered houses. Gradually the houses dwindled. Then the fields gave way to open land. As I went higher, the dirt road became a little used track and then nothing more than a broken path. After 1300m of ascent, I reached the top of the ridge at 4400m and was awarded with breathtaking views across the mountains.

But still the feint path continued upwards, traversing a mountainside with steep drops to the left. I pushed on through patches of loose rock until I eventually left the path altogether and drove the final few hundred metres across the open mountainside. I’d reached a place very few people ever go, which would have taken me hours on foot.

I admit to feeling a bit lazy riding my bike in situations like this, but I wouldn’t trade it for a pair of walking boots. Hiking in the high mountains is adventurous; but taking a 200kg motorbike, on your own and with only a handful of tools to get you out of trouble, to the top of a mountain is what I call adventure. I have even been considering an attempt at traversing across the mountain ridges completely off-road, looking for another track by which to descend further up the valley, but a quick survey with Google Earth has put me off that idea – unless I can find someone else to come with me……