It has been a long time since I was last doing proper ‘adventure motorbiking’; not since March in fact, when I was driving the back-roads through the mountains of southern Bolivia. To welcome me back, the Universe made up for lost time, giving me crashes, stunning landscapes, wilderness camping, broken bikes and roadside repairs, new friends and parking in a hotel lobby – all essential ingredients for an adventure.

When leaving Pisaq yesterday, I set my compass for south, chose the shortest route to Tacna and set off. The first 450km were thoroughly predictable – I had driven that route twice already on my way to and from Lake Titicaca – but when I turned off the main road 50km beyond Puno, I was back in ‘adventure territory’: I knew the road led to Tacna, but that was the extent of my research.

The road soon turned to gravel and led me across the Altiplano, through beautiful gorges flanked by cliffs, rock spires and bluffs and on to wide plains encircled by distant peaks. After passing two villages, the road became even less travelled, and habitation progressively sparse. I pushed on, not knowing what I would find next but by now accepting that I would be camping on the altiplano that night. I was already above 4000m and still climbing – it was going to be a cold night.

One truth I have learnt travelling on my bike in South America is that prolonged, fast riding on rough roads causes things to break. It has happened several times already and around 4.30pm, it happened again – the mounting which holds the number plate and indicators gave up and parted company with the rest of the bike. Fortunately I heard it go and went back to retrieve it. Today I was able to rewire the indicators and re-attach the guilty parts with the bikers’ most trusted of allies – the faithful cable tie.

Once back on my way, I crested a ridge at 4500m to find an army barracks and a few houses in the middle of nowhere. I had less than an hour of daylight left and wanted to pitch camp, but felt I should push on past the barracks – I prefer to camp away from others for security reasons. But my onward passage was thwarted by a major ford across a river; a serious obstacle and one I was not prepared to tackle at such a late hour. I was in the middle of a completely open – and boggy – plain, surrounded by mountains and two volcanoes on all sides and nowhere to hide. So I simply found a dry piece of ground and made home for the night. The last time I slept at this attitude I nearly froze. This time I was ready for it. I got into my sleeping bag fully clothed, wearing virtually all I owned. My water bottle froze again, as did the condensation from my breath, but I didn’t.

This morning I was back on the road by 8.30am, having defrosted my food and my bike. In the clear light of the morning I saw a bridge upstream beside the barracks – a major bonus. I crossed and followed the now diminishing track upwards into a completely different landscape: mountain desert, with nothing but a thin lichen growing on the rocks. I was driving through fine sand, and it wasn’t long before I dropped my bike – for the first of many times. The landscape was breath-taking – vast, barren, deserted. A telegraph line marked my way across an otherwise featureless terrain, where the track itself disappeared at times. Eventually it topped out at 4793m – the highest point (by a few metres) I have reached whilst on this continent.

The descent was spectacular but difficult. I was riding on a single-lane track mostly suitable only for motorbikes or animals. In parts it was very sandy – a fine powdery sand, hiding large rocks and deep ruts, the worst type of terrain to ride on. Twice I came off my bike: my tires are very worn and I am stretching them out until Santiago (decent tires are hard to find here), and they simply couldn’t maintain any traction. I got up with only a few minor bruises, but the bike will need bending back into shape when I reach my destination – cosmetic only, so I can keep driving safely. 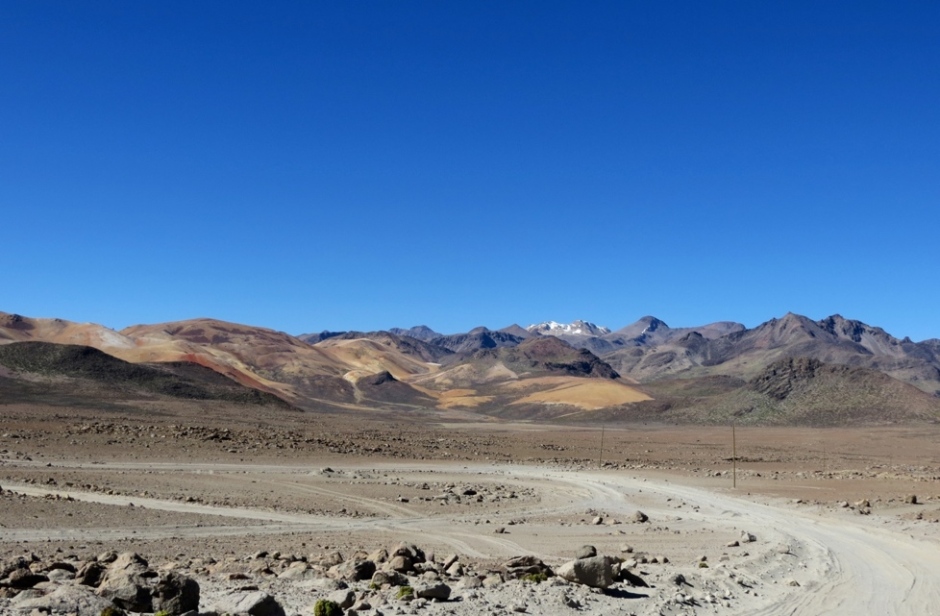 Further on, I caught a large bundle of wire in my rear wheel, whilst descending a small sandy bank. Unable to role the bike forward to the base of the bank – for this would further entangle the wire – and unable to push it back up the bank due to its weight, I had to precariously balance it using a large rock and cut the wire away, strand by strand, with my mini wire cutters – a long and tedious task. 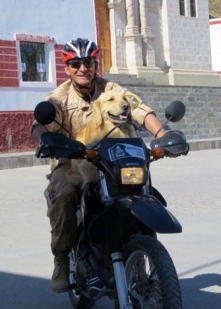 After 1500m of decent, I eventually made it to the next village and to my relief, a tarmac road. I pulled up in the plaza, covered in dust, and shared lunch with a lieutenant colonel in the Peruvian Army, who had the same bike as me! Needless to say, despite our limited skills in each other’s language, we spent the next hour talking about exhausts, tank capacity and all things moto. I now have a place to stay in Lima should I need it in future.

I am now safely ensconced in Tacna – a bustling town in the middle of the desert. The border is 30 minutes drive away, and beyond is 2000km of straight, boring road. But then again, that is what I thought when I left Pisaq, and in the last 48 hours I have just encountered some of the most enjoyable and challenging riding of my whole trip. So who knows what comes next?

1 Comment on Back On The Road – Pisaq to Tacna