I left Uspallata yesterday after lunch. The 120km drive to the next village, Barreal, was straight, hot, very windy and monotonous. At least a 30km stretch of loose gravel made me concentrate for a period, and a brief diversion to a dry lake-bed allowed me stretch my legs. But when I reached the edge of Barreal things began to liven up.

Having missed the turn into the village, I did a slow u-turn and the bike’s engine abruptly cut out. I had to give it a few minutes before it was willing to start.  A couple of kilometres later it happened again. This time I waited about 15 minutes before continuing a short distance to the village’s petrol station. A worrying development – nothing like this had happened before.

As I pulled up beside the gas pump, I saw a couple sitting in the shade beside their unloaded bicycles. With my tank filled, I wandered over to say hello. Lee and Heidi were waiting for a bus to take them and their bikes to San Juan because one of Lee’s wheel rims had cracked. They had tickets in their hands and expected the bus imminently.

We had been chatting no longer than five minutes when we were approached a portly gendarme and three other folk. These three characters were wearing casual civilian clothes and by their demeanour I would have guessed one to be a local businessman, another perhaps a bank clerk and the third – a young woman – a primary school teacher. But the caps they were sporting told us otherwise – they were members of the Republica Argentina Gendarmeria Nacional. Wikipedia tells me that this a military organisation responsible for Argentina’s borders and also homeland security matters, such as drug trafficking and terrorism (which catagory did they think we fell into?). Fortunately both Lee and Heidi speak Spanish so I got a pretty good gist of the story they proceeded to tell us. 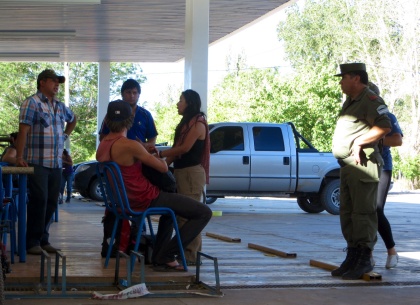 They has received an “anonymous phone call” telling them that two individuals were smoking marijuana at the petrol station. They therefore insisted that they had to search our belongings. At no point did they think to ask the pump attendant if he had seen us smoking anything – and we were sat no more than a cigarette butt’s flick from the pumps. My initial reaction was to recall the stories I had read of crooks dressed as police asking for traveller’s passport or searching them, only to steal something or extort a bribe. But the uniformed gendarme looked way too bored to be someone roll-playing in order to rob an unsuspecting gringo. Resigned to the fact that it would be easier to let the search go ahead, I nevertheless felt I had to win a couple of early points. I therefore insisted that only the unformed officer could search my kit and only when he showed me his identification, as I had no way of knowing if the ‘plain clothed’ cops were legitimate. He begrudgingly wandered off to find it and later presented it me.

So they got busy searching and found nothing. I was the third to be searched and it was a pretty half-hearted affair. They didn’t even search my pockets, bumbag or boots – the most obvious places I would keep a small stash of medicinal herbs if I had any. Whilst this was going on, Lee and Heidi’s bus showed up, and was duly told to wait. The handful of passengers disembarked and settled in for an afternoon drink at the adjoining cafe. With the searches complete and nothing found, my companeros reasonably assumed they could continue their travels. But this is South America – the Gendarmes had to fill out a report (one for each of us and them) stating that we had been searched and nothing had been found. This took them at least another 45 minutes. By 6.45pm I was finally back on the road, two hours after arriving at the service station. 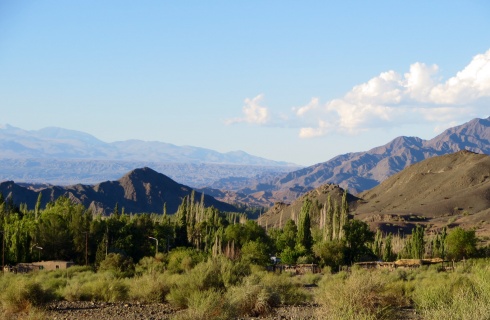 I was feeling optimistic and decided to push on a little further before stopping for the evening. The bike had started immediately and was running without missing a beat. Then, after 20km, the engine cut out again. And again 15km later. I should have been savouring the stunning and dramatic landscape which by now was bathed in a soft evening light, with long shadows accentuating every fold in every hillside. Instead, I was getting a bit hot under the collar, shall we say. I made it to within 2km of the centre of the next village, Callingasta, when the moto finally dug her heals in. I waited for her to cool down, I free-wheeled the downhill bit, I tried to cox her home in first gear, I changed the spark plug. In the end I had to ignominiously push her across the long bridge and into the village. It was 10pm and I was in no mood to camp. So I booked into the local ‘hotel’ at about £12 a night – aircon, a shower and a double bed….. 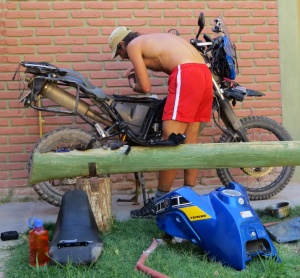 This morning I went searching for a place to recharge the battery, which had taken a caning last night as I tried in vein to get the moto to start. The outcome was inevitable – it always happens this way. I walked around the whole village then back across the bridge, about 3km under a beating sun, only to be told there was a place that had a charger literally 100 metres from the hotel. By the time it was charged the heat of the day was upon us. The village was literally deserted so I followed local custom and enjoyed a few hours of aircon. Then I got to work and removed the fuel tank. Almost immediately, the likely culprit made himself known – the plug that connects to and powers the fuel pump came loose. It shouldn’t have, and thus I assumed that I had failed to seat it properly when I last removed the tank. I nevertheless had a good look around, but a test drive after reassembling everything suggests I’ve nailed it.

Now all I need is for the ATM machine in the plaza will come on line, as I am about to run out of pesos and as things stand I can’t pay for the hotel.

A ‘happy’ New Year? Perhaps not in the conventional sense, but certainly a novel and interesting one, and about an hour ago it got a whole lot happier. That said, I’ll only know tomorrow when I attempt the next leg north.

4 Comments on A Short but Eventful Ride to Callingasta