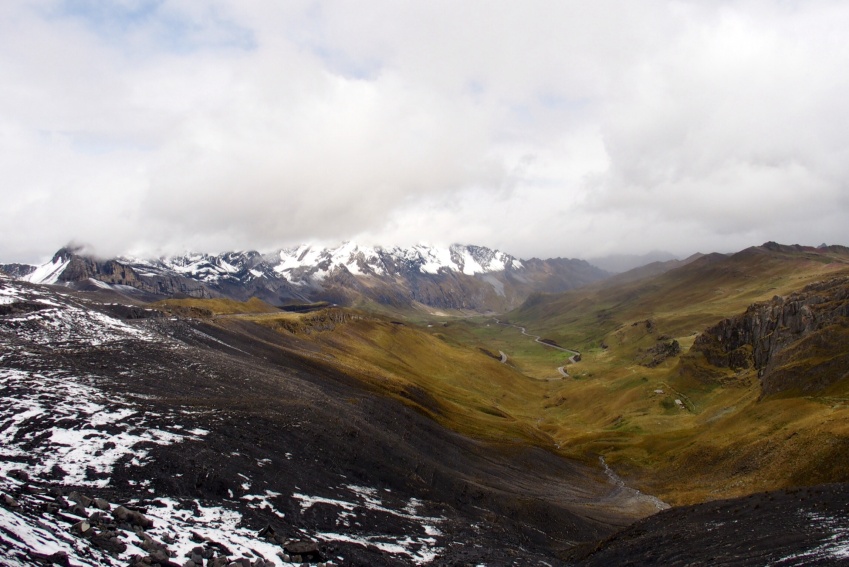 I am back in the ‘high mountains’ – the Cordillera Blanca, a cluster of dramatic, ice-covered peaks, surrounded by glaciers and lakes, rising at the highest point above 6500m. Other than the occasions I crossed between Santiago and Mendoza late last year, I haven’t ridden amongst such landscapes for a year now. Looking at a map of South America, it would be easy to assume that the Andes are a continuous chain of high peaks. But that is not the case. From northern Argentina, the mountain range expands in width and flattens out. The towering mass of snow-covered peaks found further south by-and-large disappear; in their place is the gently-rolling Altiplano punctuated by a few isolated peaks and volcanos. There are exceptions – the beautiful Cordillera Real which overlooks Lake Titicaca is similar to the Cordillera Blanca, but I did not ride through that mountain range.

After four days in Huanuco, where we had the bikes serviced, we left and headed west. The heavy rain had continued, but whereas earlier it challenged us with swollen river-crossings and muddy tracks, this time it manifested as new obstacles. Following a river valley en route to La Union, we came upon a queue of stationary vehicles. Edging to the front to see what was causing the blockade, we found a mud slide had engulfed the road, making it impassable to cars and trucks – but that didn’t necessarily mean motorbikes. As we rounded the corner, the group of locals who had gathered beside mud slide enthusiastically gestured to us to pass.

It didn’t look so bad, so I revved the engine and waded in – literally. It was much deeper and thicker than I had expected. The mud clung to my rear wheel, and the bike struggled to pull itself free. Some of the spectators came to my assistance (without being asked, as is always the case here in Peru), but soon retreated in peels of laughter when my rear wheel covered them in mud. With a lot of throttle I finally made it through. Pau was next. Her underpowered Suzuki fared less well. By the time I had dismounted and returned to give her a hand, I found a group of locals pushing a very muddy bike towards me – accompanied by a very muddy rider.

Mud was the name of the game for the remainder of the day. In some places it was just the residue from previous slides which had been hurriedly cleared, leaving the road smeared in a few inches of the stuff. In other places, fresh slides were being cleared by bulldozers as we waited. Telegraph poles leaned over the rushing water where the riverbanks had collapsed. We pushed and slid our bikes through it all. By the time we reached La Union our bikes – and in Pau’s case, riding gear – were filthy.

Yesterday we left La Union after another night of rain, but at least under a brightening sky. After no more than 20km, we came across another queue of static vehicles. This time a major rock fall had blocked about 30 metres of the road. Such challenges are tailor-made for adventure bikes. After conducting a foot recce and clearing the worst of the rocks away to create a path, I was confident I could get the motos through. After removing my kit bag to lower my centre of gravity, I rode the Tenere into the obstacle course. It was a case of ‘little by little’ as I picked my way up and over the rocks, sometime having to clear large angular stones from in front of my rear wheel. 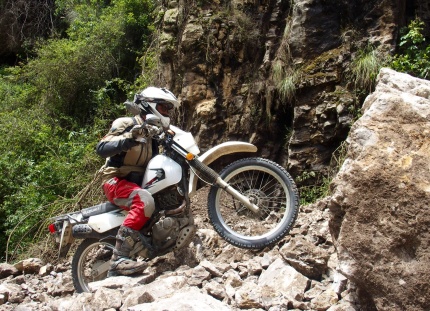 At one point, when I was delicately edging round a boulder, a shower of small rocks began raining down from above. The locals shouted warnings, telling me to leave the moto, and Pau (who was videoing me) bolted. Unable to deploy my kick-stand due to the uneven rocks below, I was left atop the moto and feeling somewhat exposed as falling rocks bounced around me – a few uncomfortably close. I just tucked my head down to protect my face, hoping the helmet and my riding jacket would absorb some of the impact if I got hit. The ‘shower’ over, I got the Tenere to the other side, and then returned for the Suzuki. Without any luggage, the 110kg bike skipped nonchalantly over the rocks – another very convincing demonstration of why I need a lighter bike.

Back on our way, we slowly climbed into the high mountains, up the eastern flank of the Cordillera Blanca. Topping out at 4700m, we turned off the main road on to a small dirt track which cut 60km across the mountain range. We were now riding flanked by snow-covered slopes, up to 4890m – the highest point I’ve reached thus far in South America. In a brief window of clear weather, we were treated to some stunning views of this wild and rugged landscape. But then the window closed and we were blanketed in cloud and snow, driven hard into our faces by strong winds. In some places the track turned into a stream, the numerous and large potholes becoming clusters of small ponds. We were wet and cold, but it made for exhilarating riding – alone in the remote mountains, knowing we had to push on and expecting that no one would be passing by to assist us. It was a challenge, the sort of which you just don’t find riding a ribbon of tarmac. I loved it.

They say the Cordillera Blanca rising above Huaraz is one of the most beautiful mountain ranges in the world. As yet, we haven’t set eyes on this vista – only cloud. We are passing the day in the town, drying our clothes and kit and hoping for sun. There are numerous tracks crossing the mountains which we hope to explore – tracks that should be a dream to ride, but it would be nice to see some mountains too.

6 Comments on To Huaraz – Through Mud, Rocks and Snow