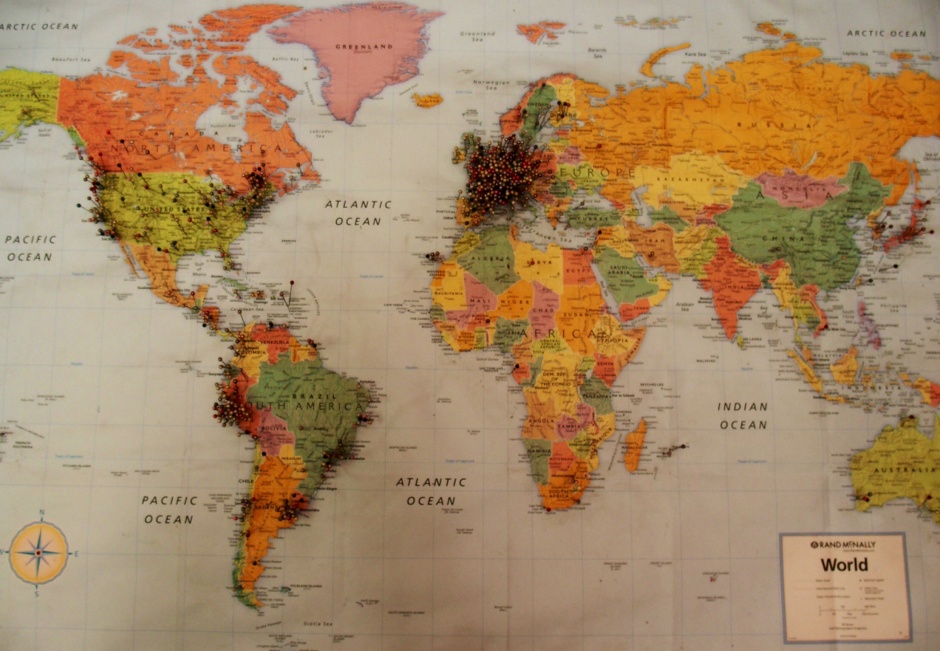 Maybe you are now convinced that a long trip is what you need, but the prospect of planning and preparing for it appears daunting.  In this post, I hope to show that it needn’t be.

To a motoquero with no experience of overland travel, the prospect of planning and embarking on a long ride across foreign lands can be a daunting one. Unfortunately for some, it looks and feels like a step too far, and they don’t go. Reading some of the ‘adventure biking’ literature out there, it would be easy to think you need a year or so to plan a big trip. The checklists offered in some books stretch to several pages. I drove my Tenere out of customs at Buenos Aires airport four and a half months after deciding to go – and having only acquired my moto licence seven months before I set off. So perhaps I can offer some useful advice and observations, as an overlanding and motorcycling novice, to others in a similar situation.

Of course, time is a valuable commodity in planning such an endeavour. If it’s available, take it. But I suggest that you don’t agonise over achieving perfection, for two main reasons. Firstly, as any soldier will tell you from hard-won experience, no plan survives contact with the enemy. No matter how well you plan, events will conspire against it. So go with a sufficiently robust plan, but one which is flexible and can be developed on the road. Secondly, for me the soul of a long journey lies in the unexpected. So let the journey surprise you, don’t over-plan and over-control it. The best advice I was given by anyone as I planned my trip was from a motoquero who had recently finished two years travelling around South America: “Get yourself a decent, reliable bike, ship it over here, and then take it from there.”  Looking back now, he was pretty much on the money.

The two most valuable things you can take with you on a long ride is time and the right attitude. With sufficient time, almost any ‘problem’ can be solved. I broke my transmission and it took six weeks to get the necessary parts from UK. I had the time, so I simply got on a bus and did something else whilst I waited. Then I had my passport, vehicle documents, laptop and other important stuff stolen in Santiago bus station – same detail. And with the right attitude, which is best cultivated before you set off, such ‘mishaps’ and delays will not be a source of frustration; on the contrary, they will present themselves as part of the adventure.

Time is perhaps the easy bit. Of course, the more time you spend on the road, the more money you will need. This can pose both a practical and a psychological barrier to some. However, the number of people I’ve met on the road bears testament to the fact that money needn’t be a barrier. Some worked full-on with a strict spending regime in place to accrue a sizeable travel fund before setting off. Others let their house to create a monthly income stream. I’ve met people who work along the way, using their imagination and a bit of willpower to find ways to earn money: (if you need convincing, watch or read, “Into The Wild”).  And once again, attitude plays a big part; if you choose to, you can live fugally on the road and stretch your funds.

Your moto is of course a key part of the trip. I’ll cover the issue of “Which bike?” in a separate post, but as a starter, consider this question: are you going on a bike trip, or are you going to travel on a bike? There is a big philosophical difference. If it’s mostly about the bike and the riding, you’ll probably want to spend more time trying to find the best bike for you and your particular trip; and that will probably mean taking your own machine. If, on the other hand, the bike is primarily just the means by which you will travel, we might be talking about a locally purchased Chinese 250s….

And what about bike skills? I passed my test seven months before I set off. I did a weekend of off-road riding in Wales at the Yamaha Tenere Experience on my own bike, and a day with the same team learning essential, basic mechanical skills. Thereafter, the open road was my teacher. I accepted that I would drop my bike regularly and I learnt to ride on the dirt by doing it. And armed with the Tenere service manual, I’ve explored the inner workings of my mount as I’ve gone along. The other key piece of advice that shaped my preparation came from Nick Sanders – a man who knows a thing or two about riding a moto long distances: “I don’t travel with many tools or spares, because modern bikes don’t break much – and when they do, there is usually someone around who can help.”

If you’re knowledge of all things mechanical is limited, outsource the problem. Simon, the Yamaha mechanic who serviced my bike before I left, has given me his personal email and is always at hand to help me diagnose problems. So too are the guys on the XT660.com forum, who know the bike intimately. It’s a factor to consider when choosing your moto – how good / helpful is the forum of a particular bike? It’s got me out of trouble a couple of times.

There are a few things that time and the right attitude may not solve, and thus need some attention in the planning phase. Research the bureaucracy of the countries you want to visit – visas, medical requirements, insurance and the like. These issues are more difficult, though not impossible, to fix on the road. A friend of mine recently flew to Costa Rica but overlooked the need for a yellow fever certificate; she was back in Peru sooner than planned. Personal insurance for moto-riding is very difficult to get after leaving UK. But remember – lots of people have previously done what you want to do; don’t re-invent the wheel, just ask them. Find someone who has done a similar trip to the one you envisage and let them do much of the leg-work for you.

Of course, being a skilled rider, mechanic, linguist and all-round adventure hero might make the journey easier and safer. But let’s put this in context. I taught my girlfriend to ride six months ago, and she is now bouncing along mountain dirt tracks on a little Suzuki DR200. An Israeli guy I hung out with quit his job, learnt to ride and got a moto licence, flew to Santiago, bought a cheap Chinese 200cc Euromot and rode to Colombia; every time it broke, a local mechanic got him back on the road. And we are, after all, talking about adventure here – so why spoil it by being overly-prepared?

With the right attitude, lots of time and a bit of cash in your pocket, anything is possible. So what are you waiting for?

You may also enjoy:

The ‘Big Trip’ – Feeling the Call, Making the Jump

Why We Ride – The Essence of a Road Trip