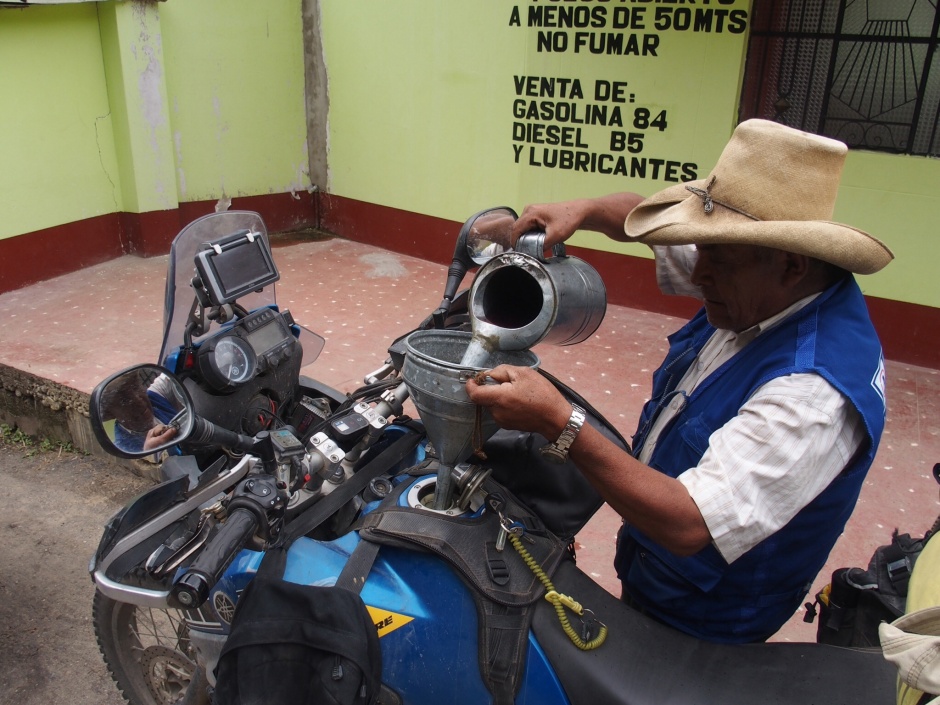 The coastal plain, the desert and the Panamericana Highway now feel a long way away. We are back in the mountains, and settled once again in an old colonial town where the pace of life is slow and where if feels like everyone knows each other – the ‘big village’ syndrome I first saw in Ayacucho.

We left Trujillo under an uncharacteristically cloudy sky. Determined to limit our exposure to the Panamericana as much as possible, I selected a route from the map which cut the corner through the mountains to Cajamarca. An amiable policeman who flagged us down at a road junction told us the entire route to Cajamarca was hardtop; he was half right.

We stopped is the sleepy village of Cascas for lunch. Thereafter, the road turned to dirt and then soon after entered the cloud. We climbed gradually on a twisting road for maybe 20km or so in thick cloud, sometimes only able to see 30 metres ahead of us. Then it started to rain. After a thousand metres of ascent, we suddenly emerged above the cloud to find ourselves amongst a stunning mountainscape, thick in vegetation and riding on roads cut into precipitous slopes. The rain continued, as did the sinuous track for many more kilometres.

As we neared the main road which would take us along the valley to Cajamarca, I had my first ‘off’, as bikers like to call it, since chasing the Dakar on the Bolivian Altiplano. Where rainwater or seasonal streams are prone to cut the road, run-off channels made from concrete slab are put in place. Wet concrete is very slippy. I hit one of these run-off channels on a corner, and with a thin layer of mud guaranteeing zero traction, the bike slid away from under me and went down hard. As usual, the Tenere just bounced without a scratch. I, on the other hand, got up muddied and bruised, and have been a little stiff down the right side for the last few days. 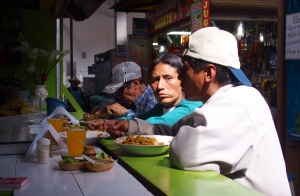 Cajamarca, and the smaller Chachapoyas where we are now staying, fall into the select category of Peruvian towns alongside the likes of Ayacucho, Cusco and Arequipa. Whilst all have their own individual character, they share a common style of colonial architecture centred around attractive plazas and often spectacular cathedrals, with beautiful churches scattered around the town centre. But their is something special and more intangible about them (perhaps with the exception of Arequipa, which is both very large an not in the mountains). There is a stronger sense of community, most notable for me in the central markets where the locals gather to eat as well as shop. The campesinos (folk from the villages) are also far more prominent, coming into town to sell their wares on the streets and outside the market. Usually in traditional dress of ponchos, colourful shawls and the headress of the local area (which vary markedly as you move from region to region), they add a distinctly indigenous and local feel to the towns.

They also add a characteristic which I find more uncomfortable. The poverty of these folk is very apparent, magnified especially by the number of elderly men and women who settle by the sides of the streets selling food or simple crafts, or wandering the market aisles asking for food or a little money. Graceful retirement, supported by a state pension, is not an option for most here. I am always struck by the number of old folk I see on the streets, still seeking to secure a little income. Yet a few blocks from the plaza in Cajamarca, for example, is a brand new mall, a concentrated exhibition of the trappings of a modern consumerist society, complete with its own Starbucks and MacDonalds. It feels like a slap in the face of the poor campesinos who don’t even have the guarantee of a meal each day. And it feels like a personal and direct challenge, a confrontation, for it represents and epitomises the wealthy and excessive western society from which I come. Indeed, only a few days ago I was drinking a coffee in Starbucks in Trujillo; the cost of one coffee would provide three basic meals to one of the old men or women on the streets of Cajamarca. I sometimes struggle to reconcile my privileged position in this very inequitable global social structure. 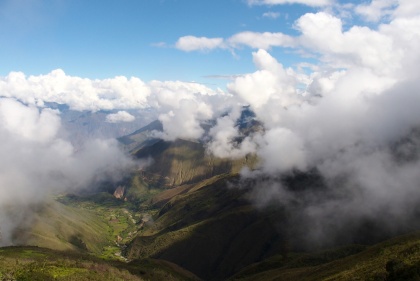 We had been told that the ride from Cajamarca to Chachapoyas was both beautiful and spectacular. And it was. A hundred kilometres or so after Cajamarca, the road crosses the Rio Maranon valley, which some call Peru’s Grand Canyon. On the west bank, the road switch-backs downwards from 3000m to 850m, and then climbs back up to 3600m. In the space of 90 minutes, you pass from high mountain where the air is cool and fresh to a humid tropical valley. Ascending the east bank, you again pass through a thick band of cloud, whose moisture nourishes the land and allows dense vegetation to flourish. Emerging above the morning clouds, the view was breath-taking. The road then drops down into lush valleys as it heads north. From the picturesque village of Leymebamba, it then follows an enchanting valley beside a crystal clear mountain river, which inevitably enticed us in for a swim.

It now feels like we are in a secluded corner of Peru, as we head into the mountains characterised by cloud forest and start closing in on the border. A short ride to the south are the Kuelap ruins, bettered only by Machhu Pichu, they say. And the same distance to the north is the Gocta waterfall, the third highest in the world. Both warrant a visit. Also, my path has finally crossed that of my friend Will Acha, who has been travelling south on buses from Mexico for the last year. So we shall stay here in Chacahpoyas a few days before making the final push for Ecuador next week.